Midnight Basketball is back!

“You can get people out of a lot of trouble if they are in an activity that they love and people are watching, and they have games, and prizes and music to go along with it. The competitive spirit will keep it indoors instead of outdoors,” said Mayor Dickens, in an interview outside the C.T. Martin Recreation Center.

City officials said in organizing this league, they looked at the metrics of where crime was happening in Atlanta, who was involved, and at what hours of the day.

The league in west Atlanta will run on select nights through June with games played between 7-11 p.m.

Some players suggested this tactic could help with the crime wave gripping the city.

“I’m from a high crime environment, so I know around this time, all day long there’s crime going on, I feel like this right here gives you an opportunity to get away from that,” said Tony Hines, who’s playing in the league. 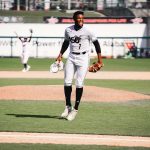 Next Story:
SWAC Baseball Tournament will be held in Atlanta